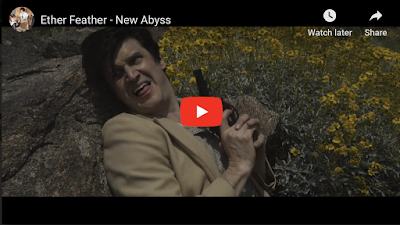 "Built upon Ryan's impeccable drumming, it is buoyed by delightfully aggressive bass lines and Young's searing guitar work. It asks to imagine a fusion between progressive rock of the 1970s and the blues-based heavy rock of acts such as Budgie and Pentagram while sounding thoroughly up-to-date." -- PopMatters

"Stole my heart from the moment I pushed play. Dreamy vox...Toggling between dark doom and a decidedly acid-soaked psychedelic dream-pop direction. The rhythm section is stellar and the sound is brilliantly captured... I could see this becoming a beloved go-to in my collection." -- Doomed & Stoned

"What would happen if you took the doom stylings of Black Sabbath and Kyuss, the proggy weirdness of Captain Beefheart, and the jazzy insanity of Mahavishnu Orchestra? There's only one answer, and it's the Los Angeles-based trio Ether Feather." -- Metal Injection

L.A. trio Ether Feather share a very clever video today inspired by Italian thriller cinema for the song "New Abyss" from their newly released full length debut. Watch and share the video alongside an astute review of the album courtesy of The Obelisk HERE. (Direct YouTube.)

Metal Injection recently shared a full stream of the Devil - Shadowless - Hand album HERE. (Direct Bandcamp.) Doomed & Stoned previously shared "Cayenne" HERE. And, PopMatters launched "Your Half In The Middle" HERE.
What resides in the ether? Floating like a lead balloon in Ether Feather’s inverse universe is the meeting point between Black Sabbath, Mahavishnu Orchestra, Kyuss and Captain Beefheart.


The Los Angeles trio’s sound is a weighty, swinging brand of desert rock influenced heft informed by elements of No Wave, free jazz and post-punk. It’s not jammy for jam’s sake, nor is it neo-jazzbo navel gazing - it’s crafty and astute, head-bobbing thud with a flair for tasteful melodic quirks.


“By the time I started writing the third Sand record, it became clear the music was shifting from the Mahavishnu-esque mid 70's-fusion to more part-oriented structures and the songs seemed to want vocals,” Ryan explains. Encouraged by engineer Andrew Murdock (Alice Cooper, Lou Barlow) while tracking new songs, the band embraced stylistic shifts and emerged anew with an EP, Other Memory in 2017. After touring that material a couple of times with bands like Cursive and Minus the Bear, Ether Feather further honed its sound to form the hook laden 8-track debut album, Devil - Shadowless - Hand.


“Ether Feather is definitely a band where we can try weirder stuff and stretch out creatively in ways that may not be appropriate in other musical situations,” Ryan says. “We can mix and blend aesthetics and make hard turns. Tim was in the Pacific Northwest during the first wave of grunge and brings something very different from me to the table, having come up in the late 90's Chicago No Wave/Free Jazz/Metal scene.”


Album opener “Falconer” pits a chugging Helmet-eque guitar riff against Ghost-like harmonies and indie rock rhythms before busting open with a beautiful stadium rock guitar solo. Elsewhere, “Your Half In the Middle” floats along, led by the Byrds-esque vocal harmonies of Blue Oyster Cult’s “Don’t Fear The Reaper,” with similar juxtaposition of melody and ominous tones. “New Abyss” flexes the band’s jazz chops, but moreso in the manner of Richard Hell & The Voidoids or the Minutemen waxing prog-punk. Throughout, every song is full of surprising and enchanting musical twists that keep each song exciting and demanding repeat listens.


Devil - Shadowless - Hand is available to stream and download, released on September 6th, 2019. 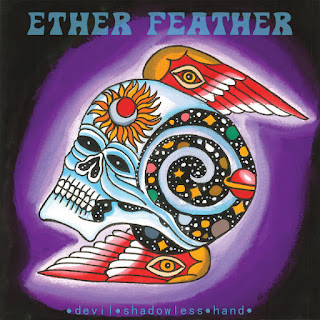