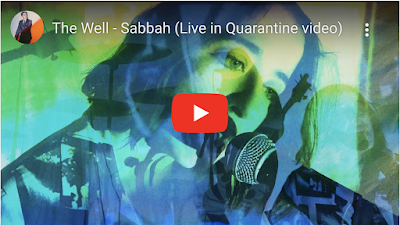 During a global pandemic, an American political revolt and a new world in quarantine, one has to consider fresh ways to view the production of videos and making and performing music in unchartered territory, unlike anything this generation has seen before. The Well tackled just that when faced with creating a video for their single "Sabbah" from their most recent release Death and Consolation. With a limited time frame and social distancing in full effect, The Well had to get creative, channeling a psychedelic dark experience through a very different means. Each member of the band (Ian Graham on guitar, Jason Sullivan on drums, and Lisa Alley on bass) recorded their parts individually with sound engineer, TV's Daniel, masked up in their practice space in Austin, Texas.

The next night, on a small outdoor set, each band member filmed their respective video parts solo, joined only by TV's Daniel as masked director and videographer. The scenes were then inter-woven together into a mesmerizing smokey psychedelic dreamscape using 3 cameras and projector lights to reconstruct the group experience. All said and done, this live version of "Sabbah" was recorded, mixed, shot and edited in a three day quarantine time turnaround, resulting in a unique and experimental piece of work that encapsulates the energy of The Well's live performance, despite being surrounded by nothing but uncertainty and detachment in the world around them.

About the band's most recent album:
Death and Consolation is without a doubt a weighty album title. And, The Well is among the heaviest heavy psych bands in existence. So when we say that there's even more darkness and intensity to the band's third album than previous efforts, take heed. It's a deep sea diving bell of enveloping heaviness and longing.