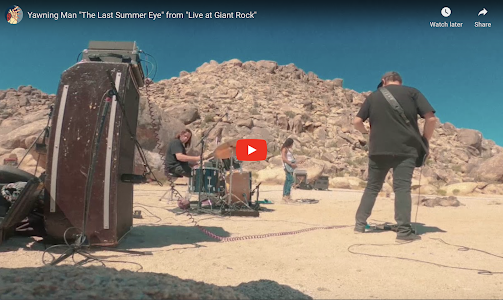 Coachella Valley's legendary innovators of desert rock Yawning Man, led by desert "generator parties" founder Mario Lalli share a video from their forthcoming live performance film Live At Giant Rock today via Metal Injection. The film was shot during Coronavirus lockdown on the outskirts of Coachella Valley. Watch and share the band’s performance of “The Last Summer Eye” and read an extensive interview with Lalli about the early days and lasting legacy of desert rock HERE. (Direct YouTube.)

Yawning Man was formed in 1986, in the Southern California desert near Palm Springs. Founded by members Gary Arce & Mario Lalli. The band cultivated its unique sound playing marathon psychedelic jams during sets performed in the only readily available venues at the time, impromptu concerts staged in the nearby deserts. As word spread of these gatherings, they evolved into what were called "generator parties" which were informal concerts held deep in the uninhabited desert outskirts of the Coachella Valley, gradually attracting larger and larger crowds to their shows. For over 30 years the band has continued to evolve, never straying from their intuitive, emotion driven sonic soundscapes. In those 30 years Yawning Man has released fourteen recordings and toured all over the world including North America, South America, Europe, Australia and New Zealand.

Gary Arce on guitar and Mario Lalli on bass remain, joined by drummer Bill Stinson as the band’s current lineup.

A longtime dream has been to capture the band performing in the very environment that so inspired their music, The opportunity arose in 2020 from the challenges artists and musicians faced during the Covid 19 Pandemic, social distancing forcing artists to creatively adapt to alternatives to express themselves musically and visually.

This cinematic concert experience is intimately and beautifully captured by videographer Sam Grant in the environment that inspires Yawning Man’s spacious, expansive and cinematic music. Filmed live in the early morning hours of May 18th, 2020 in the visually stunning and mysterious landscape of Giant Rock.

In the spirit of Pink Floyd’s “Live at Pompeii” the performance is shot on location with no audience, just the band performing their instrumental meditations in the rugged beauty of the Mojave Desert.

Giant Rock in Landers California has attracted Native American Nomads, Scientists, UFO Researchers, and travelers from all over the world, drawn by its magnetic spiritual energy.

The bands outdoor performances are legendary.... this film is the first artfully composed representation of that experience. Yawning Man’s music has found a most fitting venue.