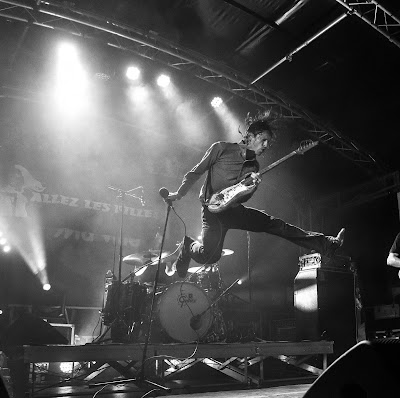 
San Diego trio The Schizophonics have been invited by host & organizer Jesse Malin (D Generation) to perform at 'Gates of The West: Celebrating the 40th Anniversary of London Calling' in NYC on December 14th. The event is a benefit for the Joe Strummer Foundation featuring performances by Debbie Harry, Fred Armisen, Eugene Hutz (Gogol Bordello) and more celebrating the cherish album by The Clash. For more information, tickets and the full lineup go HERE.

The Schizophonics' sophomore album, People In The Sky was released on Halloween, and has received considerable press praise. The band recently returned from an extensive US tour, only to be personally invited to fly out by Malin after he'd seen their wild live show.

The Talkhouse recently hosted the song, "Steely Eyed Lady," with a fittingly astounding introduction courtesy of beloved performance artist El Vez (a.k.a. Robert Lopez) HERE. (Direct YouTube.) BrooklynVegan previously premiered the first single "Battle Line" available to hear and share via BrooklyVegan, YouTube, Bandcamp and Spotify.
Over the last few years, The Schizophonics have built up a formidable reputation around the world as an explosive live act. Tapping into the same unstoppable combination of rock 'n' roll energy and showmanship that fueled The MC5 in the heyday of the Grande Ballroom, their wild live show is heavily influenced by artists like James Brown, Iggy Pop, Jimi Hendrix, Little Richard, and The Sonics. Singer/guitarist Pat Beers and drummer Lety Beers formed the band in San Diego in 2009 and have worked tirelessly since then, playing hundreds of shows around the globe and winning 7 (SEVEN!) San Diego music awards.


The album, titled People in the Sky was released on October 31st, 2019 on Pig Baby Records. Orders are available HERE.
THE SCHIZOPHONICS LIVE 2019:
12/14 New York, NY @ Bowery Ballroom - Gates of The West: Celebrating the 40th Anniversary of London Calling