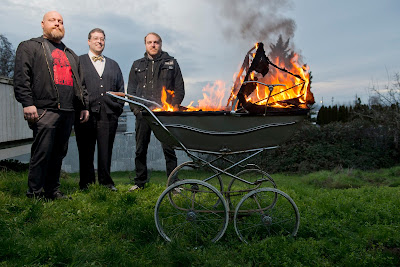 "The fifth -- and best! -- album from longtime MetalSucks faves, Gaytheist... Another blast of infectious, energizing metal, punk, and noise rock from a band that has already proven to be masters of the form." -- Metal Sucks

"A trio that brings Thin Lizzy-like riffing, AmRep-styled noise rock mayhem, and a punk attitude to everything they do. An absolute motherf**ker of a record." -- No Echo


Portland, OR trio Gaytheist are streaming their forthcoming 5th album in its entirety starting today via Metal Sucks. Hear and share How Long Have I Been On Fire? HERE. (Direct Bandcamp.)

Brooklyn Vegan previously shared lead single "The Dark Deep" HERE. Post-Trash launched "Hornswoggled" HERE. No Echo  recently hosted "Hashbrownblessed" HERE.
The band had planned to play a handful of Pacific Northwest shows around the release date in April, but these have now been cancelled. They were to be followed by more extensive North American dates in summer. However, due to the current situation, obviously these dates are also up-in-the-air. Please see current shows below.

Gaytheist return Spring 2020 with their 5th full length record and their finest work to date, How Long Have I Been On Fire? Following several years of living on opposite ends of the country, the band reassembled in Vancouver, Washington and delved into a writing frenzy.

Once again under the watchful eye of master engineer Stephan Hawkes, Gaytheist recorded all of HLHIBOF on the last weekend of June, 2019. Thirteen songs of KABOOM rock, depression anthems and various attempts at communication. Feedback, rhythm and speed, it is an amalgamation of punk, hardcore, metal, and wild rock.

Incredibly catchy leads and soaring vocals are carried by subatomic, weighty bass grumblings while a tornado of drum wailing knocks the listener on their ass. Oh, and they're really funny too.  Who says metal has to be so serious all the time?

How Long Have I Been On Fire? will be available on LP and digital on April 10th, 2020 via Hex Records. Pre-orders are available HERE. 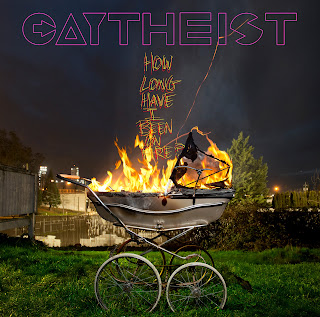