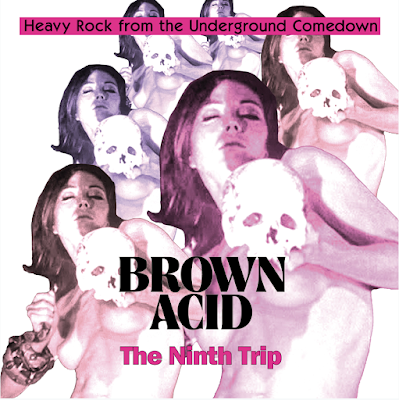 "Mining the surprising rich reserves of heavy rock and proto-metal from the ‘60s and ‘70s, these collections have been crucial to understanding the history of a subgenre of rock that had far deeper roots than most fans realize." -- Paste Magazine

The forthcoming ninth edition of the popular compilation series featuring long-lost vintage 60s-70s proto-metal and stoner rock singles, Brown Acid: The Ninth Trip is set for release on Halloween 2019. A new track from the latest installment, "Rebel Woman" by Erik is available to hear and share via YouTube HERE and Bandcamp HERE.

The first single, the heavy psych groove of "Pain" by Fiberglass Vegetables was released back in August HERE.

Read an interview with the series curators via Paste Magazine HERE. The Brown Acid series is curated by L.A. label RidingEasy Records and retailer/label Permanent Records.