“Mullenhour's vocals rise to heated roars worthy of stardom, which lend themselves perfectly to Touched by Ghoul's brand of rock that is loud and heavy..." -- Gaper's Block

"Sounds like some long-lost ferocious ’90s punk cult hit, like the unholy love child of Bratmobile and The Lunachicks...A record that starts strong, and only gets better from there." -- The Onion AV Club

Chicago quartet Touched By Ghoul are streaming their forthcoming sophomore album Cancel The World today via Echoes & Dust ahead of tomorrow's release date. Hear and share Cancel The World HERE (or select tracks now at Bandcamp, Spotify and Apple Music.)

Funny story: Chicago’s quartet of weirdos Touched By Ghoul recorded their sophomore album Cancel The World at Steve Albini’s Electrical Audio in July 2019 with the title already in place. They mixed it in January 2020, and then the world was actually cancelled. After idling for months, the album was sent for pressing the vinyl to support tour dates. Tours were again cancelled. And, the pressing plant’s press was broken. Cancelled once again.

Of course, everyone’s been through the wringer over the past couple of years, and some much more severe than this. But, Cancel The World may just be the forbidden music so many artists have sought to make. Ironically, the album finds the band taming its aggressive Birthday Party / Babes In Toyland noiserock attack ever so slightly in order to embrace melodies and allow their tousled cynicism to truly shine on songs like “Better Than Me”, “Lost At The Costco” and the title track. but that doesn't mean their acerbic wit isn't on full display.

Touched By Ghoul is fronted by former Sybris singer/guitarist Angela Mullenhour, along with guitarist Andrea Bauer and the rollicking rhythm section of bassist Alex Shumard and drummer Paige Sandlin. The intrepid group made its debut with 2016’s Murder Circus album (also on Chicago imprint Under Road Records) and for a while things were going pretty great pre-pandemic: TBG played some awesome shows (supporting Foo Fighters at Wrigley Field, Wayne Kramer's MC50, Local H), received great press and built up a small army of zombified followers.

At last, with nothing more than this album on the horizon for the time being, Touched By Ghoul are here to undo whatever star-crossed curse they’ve brought unto the world, one gloriously weird, catchy song at a time.

Cancel The World will be available on LP, download and streaming on December 3rd, 2021 via Under Road Records. Pre-orders are available HERE. 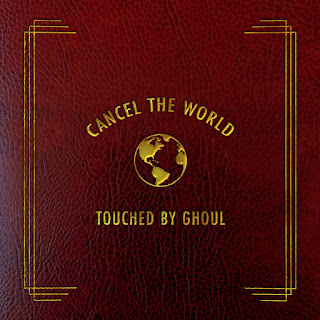