Boston quintet The Burning Paris announces their reunion with a handful of New England shows and new recordings on the way. The band premieres their new cover of the Starflyer 59 song "Softness Goodness" for an upcoming tribute album today via Brooklyn Vegan. Hear and share that track HERE.

The band also releases a 14-song retrospective album on May 20th. Stream the full album now via Bandcamp.

In the summer of 2000 a bunch of friends were on a camping trip when some of them realized they played different instruments and had the desire to make music again after previous bands had disbanded. Josh, Nate, Jen, Ben and Mike all started working on music together with no real focus other than to play together. When Ben hurt his wrist and couldn’t play bass, he switched to keyboards. They reached out to Chris to have him come aboard. Without distorted guitars, they tried to do something different for themselves.

On a freezing winter afternoon, Nate brought a half-written song to the practice room, and it fit. Named after a frigid day/night, “Colder” became the first song by the band known as The Burning Paris.

The band wrote a collection of songs and enlisted the new-to-recording/producing Matt Squire to helm recording the debut release Coral City Ruin which was released on Nate and Josh’s label, Dopamine Records to regional acclaim.

The band was praised for its live performances of cathartic nature and the unique approach for independent music using a cello. The band toured both east and west coasts in support of the record before signing on with Virginia’s Magic Bullet Records.

The Burning Paris once again recorded with producer Matt Squire who helped refine the band’s sound. The end result was the mini-album and by December you will know where your heart truly lies. The record, a solemn affair rooted in depression (as previous efforts) launched the band further. Press and radio attention became more frequent as did the populated live shows.

The group toured in January 2003 nationally to support the record. In the months after, the band drifted apart to have Nate, Jen and Josh depart to join On Fire (also recording on Magic Bullet Records.) Nate has since recorded for Magic Bullet and The Mylene Sheath labels in Ekso Ekso (I am Your Bastard Wings) and Lavinia.

After a long pandemic lockdown, Jen and Nate started writing again and Chris joined them. They quickly realized they would be The Burning Paris again. They were able to find Brad (Herra Terra, Seneca) to fill the drum slot and they all got to work. Later finding Jon (Lavinia, Seneca) to come on board. This new 5-piece version of the original sextet ensemble simplifies and makes more clear the music they always wanted to convey. It’s now more mature, to the point, and cathartic as ever.

In November 2021, the band entered the studio for the first time in 20 years to record a song for an upcoming tribute compilation for Starflyer 59. “Softness Goodness” encapsulates every emotion The Burning Paris exudes and seems like a fitting reintroduction.

A retrospective CD titled Half-Truths & Indiscretions will be released May 20th, 2022 via The Charon Collective. The collection is available on streaming platforms via Pax Aeturnum Digital. 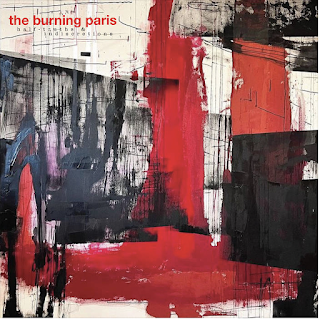 Album: Half-Truths and Indiscretions: The Retrospective

02. Building My Own Coffin