"Has the short and sweet hookiness of the Ramones or the Descendents, the rigid minimalism of Suicide, the playful, gooey synths of chiptune and a splash of hip-hop delivery in the vocals, which are deceptively catchy and full of character." -- Revolver Magazine

"This artist is tapped into a creative that is free from anyone else’s expectations, which is why his music is so rad! Imagine if Atari Teenage Riot, Wu-Tang Clan, Devo, and Joy Division decided to create a group together the outcome might sound like N8NOFACE.” — CvltNation

"His abrasive melding of everything from synthpop to industrial to new wave to other points in between can probably best described as 'synthpunk,' but whatever you call it, it's catching on." -- No Echo

N8NOFACE kicks off a US tour with Ho99o9 on Friday this week in Los Angeles. See all dates below.

The intense, hypercranked aggression of Homicide, the new full length by N8NOFACE is a stark contrast to the introspective and almost indie rock leanings of his 2021 album Bound To Let You Down. Although the two were written and recorded in close succession, the screaming hardcore synthpunk of album opener “Burn This MF” aptly sets the tone for this album’s about-face and brutal catharsis.

“While my previous album Bound To Let You Down was mostly about me coming to grips with my addiction, Homicide is me in the ‘ready to face the fight’ mode,” N8 says. “Once I was getting clean and no longer in a state of regret (as Bound To Let You Down was really about) I was no longer feeling sorry for myself. So it’s like: homicide time, ready to kill it! I do feel this is part two to my last album being they were all songs I made during that time of my life.”

N8NOFACE has been described as a Chicano Flannery O’Connor playing chiptune Ministry, the Sleaford Mods of the American Southwest, Suicide for the 21st Century and Ghostmane meets darkwave synthpunk dashed with early Ween’s glue-huffing pop. Lyrically, his sometimes romantic, oftentimes violent storytelling tunes lean toward Narcocorrido, the bloody ballads of Mexican drug cartels. It sounds dark on the surface, but really N8NOFACE’s music is a lot of fun, and as exciting as the birth of punk rock and hiphop.

He’s been making and posting glitchy synthpunk since the days of MySpace, when he first gained attention in chiptune duo Crimekillz. Even before the demise of that band, however, N8NOFACE was disseminating his dadaist lo-fi rants online, recording them on the cheap on his home computer setup. “Even to this day, everything I do is recorded in my closet,” he says. “I’ve never recorded at a studio.”

N8NOFACE has to date released 4 proper albums (available on vinyl) — Bound To Let You Down (2021), Just Here To Die (2020), Synth Up The Punks (2019) and True Story (2018) — and a slew of singles, mixtapes and collaborations, many of them with sprawling double-digit track listings. Before relocating to Long Beach, CA around a decade ago, he owned a graffiti & record store in his hometown of Tucson, AZ. It was here that he developed his vast musical taste from grimy hiphop beats to seminal aggressive synth punks The Screamers.

“I grew up around some guys living outside the lines of the law,” N8 explains. “When I first started doing this I called it Narco Punk. I’m not glorifying it, I’m giving both sides of the story. Telling the heartbreaking side of the dark side.” Coming from a hiphop and border town culture, he found it difficult to share his esoteric tastes with friends. “How do I make my friends enjoy this music?” he wondered. “I’ll take some Suicide music and twist it to get my friends to listen to this.”

Throughout, Homicide is guided by greasy synths pushed all the way to the max, lo-fi drum machine beats and N8’s charismatic vocal delivery that draws the listener in and elevates his dark lyrical themes. The claustrophobic mix and stripped down instrumentation really drives home the singer’s isolation and anger. “Fala” is a breakneck electro-hardcore love song. “F U N U N U” (say each of the letters slowly) is a chirping hook-filled mantra, “fuck anyone who ain’t ever believe in you.” Elsewhere, “Hate Me When I’m High” revolves around a bass synth line pushed to the brink of clipping while N8 remorsefully sings, “baby I'm a lost cause, this is true/ A real rock’n’roller this is true/ Hate me when I’m high.” Album closer “On My Side” is the most unabashedly synthpop tune, with an infectious, repetitive bass hook as N8 intones, “I’d kill anyone you asked me to/ Yeah, I”m here to ride/ As long as you’re on my side/ It’s a homicide, homicide, homicide.” 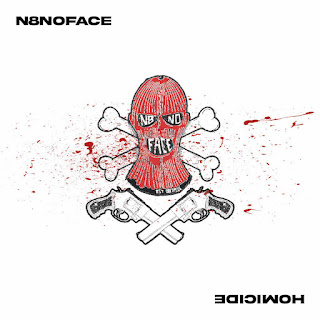 15. Lost That Found This