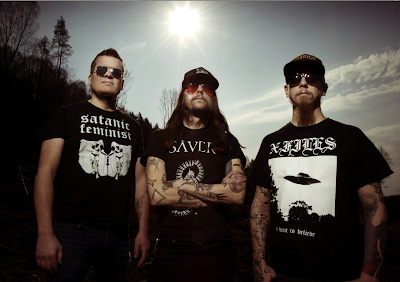 "Without vocals, Empress Rising suddenly becomes a post-metal, stoner epic in the vein of Sleep’s Dopesmoker and Monster Magnet’s 30-minute opus 'Tab.' Arguably Monolord’s most atmospheric work, the instrumental treatment gives the album a new life and listening experience." -- Consequence of Sound
Swedish trio Monolord release a special all-instrumental version of their breakthrough 2015 album Vænir today via Bandcamp in conjunction with the online merchant's continued pandemic relief effort to help artists affected by the shutdown. The instrumental mix is streaming in full via Metal Injection HERE. (And Bandcamp HERE.)

Limited edition vinyl pressings of the instrumental mixes of Vænir and the band's debut Empress Rising are also available today. These are mailorder-only, with sleeves printed on premium chrome jackets limited to 1000 copies each album. Begun as a digital-only release for Empress Rising - instrumental, the response was so overwhelming the band and RidingEasy Records decided to release both revised albums on vinyl as well.

Bandcamp is giving 100% of their revenue for all sales today, June 5th, to artists as part of their efforts to help bands impacted by the Covid-19 pandemic with canceled tours, postponed album releases, loss of work, etc. RidingEasy Records will also give the band 100% of the profits from sales of this special release today.

About the release, Esben Willems, Monolord drummer and recording & mixing engineer for the original album and this version, says, "Listening to the mixes for the instrumental version of Vænir opened an unexpected door. We seriously didn't expect that the album would take such a different shape and feel in an instrumental version. Really stoked to see how our fans will experience this release. Also, getting both instrumental versions (Vænir & Empress Rising) released on LP adds another layer. Hope you like it."

Consequence of Sound premiered the announcement of the band's 2014 debut album Empress Rising getting an instrumental release back on May 1st, with the first Bandcamp relief day HERE.

Monolord formed in 2013, quickly recording their 2xLP debut Empress Rising, which RidingEasy Records released on April 1st, 2014. The second album, Vænir, followed April 28th, 2015. The band's third album, Rust, released September 29th, 2017, was a critical and commercial breakthrough. It would be the band's last for RidingEasy, though the band remain managed by label head Daniel Hall, elevating them to the Relapse Records roster for their 2019 full length No Comfort.