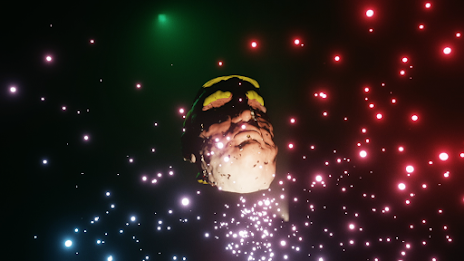 Ghost Against Ghost, the experimental rock project of eclectic composer Christopher Bono, release their first music since 2018 with two contrasting videos for the single "Darth Mango" on Our Silent Canvas Records.

This new animated video by the United Civil Liberties Union  presents a phantasmagoria of the bizarre, a comical animated expression of Trump’s dystopian America. Watch and share via Metal Injection HERE. (Direct YouTube.)

The title of the song and the cartoonish cover art by Nick Siritoch suggest political satire. However, the lyrics, while directly pointing to the unwholesome tactics and mind states of Trump-ism, contrast this with a message of resistance to these temptations through love and social unity.

The United Civil Liberties Union (UCLU) is a nonprofit organization founded in 1989 dedicated to the advancement of independently-funded new media and public broadcasting. About the project, they share: "As history and culture seem to be in a constant state of forgetting and remembering -- we hope this visual allegory of our times set to the music of Ghost Against Ghost may serve as a reminder of the work, compassion and unity that's needed to build a more equitable and just society."

Bono originally began composing this ornately orchestrated and complex piece during the Fall of the 2016 presidential campaign. He became driven by deep concern for the rising trends surrounding the ascendancy of Donald Trump. At the apparent normalization of explicit falsehoods, disrespect and verbal abuse against woman and opponents, as well as a general mentality of encouraging hate, anger, fear and division, Bono turned to music to process what was the beginning of a deeply dark period of American history.

Christopher Bono: "At the time I had already been thinking about exploring rhythm in a heavier more intense, and early 20th century classical kind of way, experimenting with rhythms energized by the music of Stravinsky, Bartok and others, as a driving force for the structure of a Ghost Against Ghost song. I also was interested in shorter forms, as Ghost Against Ghost songs historically tend to be an extended length, usually between 8 to 15-minutes. I thought to myself, 'Let’s do a 3.5 minute ‘pop’ song'. Of course, as with anything Ghost Against Ghost, it’s not an up the middle kind of pop song. The music was meant to express some very challenging emotions about the state of our world and reflects this by being abrasive, dissonant, angular, and very dense.”

After beginning work on the piece, he put it away for a few years to focus on the many other projects he’s involved with, including NOUS, Nous Alpha, Tsyphur Zalan and Gabbarein. It lingered in the back of his mind as a statement he felt compelled to complete writing and producing. In 2019, with the specter of the upcoming 2020 presidential campaign, after watching the horror of society and democracy crumbling before his eyes for four years, he was determined to complete it in time for the election.

Christopher hasn’t released a politically charged song in over 15 years, but as a songwriter he does have a history of and interest in political and social commentary in music.

“In my early twenties I was inspired and driven to write activist music,” Bono explains. “I starting out pursuing a music career as a lyric driven singer-songwriter very inspired and influenced by artists like Neil Young, Bob Dylan, Bruce Springsteen and Pink Floyd. When I began Ghost Against Ghost in 2008, interestingly enough, the first album (which I never completed) was a double length concept album narrating a dystopian American future. The central theme focused on a the runaway future of a country and world driven by crass capitalism and controlled by a totalitarian head of state. Not too far from where we’ve landed 12 years later.

"I soon put Ghost Against Ghost aside for five years to focus on several classical projects. When I revived the project in 2013 the themes present in the new material focused on metaphysical topics and dark romanticism. With the writing and release of Darth Mango, It’s fascinating to see Ghost Against Ghost return to those original themes of social commentary and political dystopia, however much I wish the circumstances had not driven me here.”

Though Bono often collaborates with friends and talented musicians, this track was performed and produced in true 2020 COVID fashion, in complete isolation. After 2 years of several collaborative projects, Christopher was inspired to revisit solo production, so he played all instruments himself, including drums, bass, piano, synths, vocals and electronics. 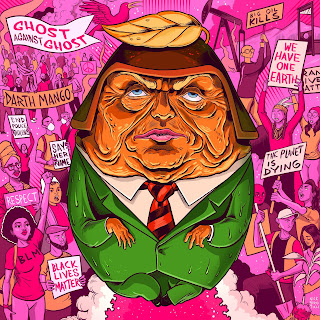 A Lost Mind Trapped in Madness.

Thoughts of All can tune a New World.

The lines we draw are only shadows.

can tune a New World.

Listen to the song everywhere: https://fanlink.to/darthmango